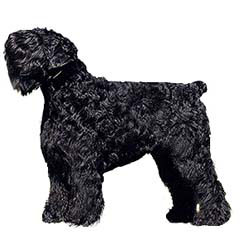 The Black Russian Terrier's roots date back to the 1930s, when the Soviet Union's military kennel began to develop an indigenous breed for use as military and police dogs. Eventually, 17 breeds including the Rottweiler, Giant Schnauzer, Newfoundland and Airedale Terrier were used to develop a large dog who could endure the harsh USSR winters and perform a wide variety of tasks. For more than 20 years, the kennel worked to perfect the breed. Once the kennel was able to produce a consistent type in the mid-1950's, puppies were sold to private breeders. In the 1980s, the breed began appearing in the United States. The American Kennel Club officially recognized the breed as a member of the Working Group in 2004. In 2006, the Black Russian Terrier ranked 134th among the 154 breeds registered to the American Kennel Club.

The Black Russian Terrier is a courageous and confident dog who tends to be aloof with strangers but utterly devoted to his people. He'll express that devotion in the form of protectiveness; this breed was, after all, developed for military, law-enforcement and guarding purposes. To reach his full potential, he needs consistent guidance and direction from his equally confident owner.

The Black Russian Terrier is quite large, ranging from 26 to 28 inches in height at the shoulder. His coat should be black, although a few gray hairs are considered OK by breed purists. The coat should be hard, dense and no more than 4 inches long. A beard and bushy eyebrows frame the face. The ears drop rather than stand upright.

As is the case with many large, guarding breeds, the Black Russian Terrier requires early training and socialization to ensure that his protective tendencies don't get out of hand. Training should be firm, consistent and positive. Those who want to go beyond the basics with their dogs will find that this breed is intelligent, good at problem-solving, and sufficiently versatile to excel in conformation, agility, obedience, tracking, herding, carting, search-and-rescue and military sports such as Schutzhund.

This breed's striking good looks require some maintenance on the part of the owner. Brushing and combing need to be performed regularly – at least once a week – and trimming by a professional groomer should occur every six to eight weeks. Weekly pedicures, ear cleanings – which can help ward off infections in those drop ears – and periodic baths will help keep this dog looking and feeling his best.

Like all purebred dogs, Black Russian Terriers have their share of health issues. The most common are hip dysplasia, elbow dysplasia and progressive retinal atrophy. Dogs intended for breeding should receive OFA and CERF clearances before being bred. Prospective buyers should ask to see these clearances before buying a dog or puppy.

Before being recognized by the AKC, names like Ole Kassandra Layk and Germiona Bars were cleaning up in Russia and Europe.