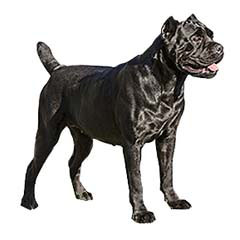 The Cane Corso is an old Italian breed first appearing in the 16th century, a descendent of the old Roman Molossian. The name is from the Latin “Cohors,” meaning guardian or protector. In the distant past, Cane Corsos were used for hunting large animals and in battles; as large-game hunting declined, they found their homes with livestock farmers and as family guard dogs. They first came to the US in the late 1980s, and have been gaining popularity.

Extremely loyal and willing to please, Cane Corsos are very protective of home and family. They can be aggressive with strangers if they’re not well socialized from an early age, and while they’re not fighting dogs, they won’t back down from other dogs who try to dominate them. They’re highly intelligent, even-minded and stable, and stay close to their masters. While they are extremely active and need tons of exercise, they’re quiet around the house.

While compact for a Mastiff-type dog, Cane Corsos are large-boned, muscular and rectangular. They have a distinctive large, regal-looking head with a broad, deep muzzle and a large nose. They may have a docked tail, cropped ears and their dewclaws may have been removed. They have short, coarse hair in black, gray, fawn, red, with or without brindling, and there are some black and tan ones, but they are disqualified for show under AKC standards. Many have a white spot on the chest, throat, chin or toes.

Cane Corsos are intelligent and highly trainable, but owners need to be firm, confident and consistent because these dogs can be headstrong. They make great companions if they know all family members are above them in the pecking order and have clear limits for behavior. Use positive reinforcement techniques rather than harsh discipline, as Cane Corsos are actually sensitive souls underneath.

Despite the fact that their coarse, stiff coat is very thick and virtually waterproof, they are light shedders and only need occasional brushing. Check their ears weekly as they can be prone to infection, but be gentle as the ears can be very sensitive.

Cane Corsos are generally healthy, but they are prone to eyelid problems such as Cherry Eye, Entropion, and Ectropion. They are also susceptible to demodectic mange, which is caused by a mite that lives on all dogs, so check with the breeder to ensure the parents and older siblings have never had it. As a deep chested breed, they can be prone to gastric bloat.