What is blastomycosis, and how does an animal get this disease?

Blastomycosis is a fungal disease caused by Blastomyces dermatitidis. This fungus most commonly infects humans and animals through the respiratory tract. When the fungal spores are inhaled, they settle in the small airways and begin to reproduce. The organism then spreads throughout the body and may infect other organs. Rarely, infection occurs through contamination of an open wound. 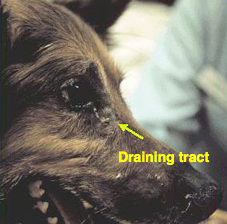 "...both humans and animals become infected in particular geographical locations."

Although researchers in human medicine have been largely unsuccessful in isolating the organism from the environment, it appears that both humans and animals become infected in particular geographical locations. In the United States, the disease is most prevalent in the warm, moist environment found along the Ohio, Missouri, Tennessee, St. Lawrence, and Mississippi River valleys. It is very common in the Southeastern United States. Blastomycosis has also been diagnosed in the Middle Atlantic States, Quebec, Ontario, Manitoba, and southern Great Lakes.

What can I do to rid the environment of the fungal organism?

Unfortunately there is nothing you can do to eliminate the fungus from the environment. The organism is ubiquitous, meaning it lives everywhere.

What are the signs of blastomycosis?

The blastomycosisfungus seems to target certain body systems, although it may spread throughout the entire body. Fever, depression, weight loss, and loss of appetite are common clinical signs. Draining skin lesions are seen in many cases. Some degree of respiratory distress is present in advanced cases. Infection of the eyes may cause sudden blindness.  Lameness, orchitis (testicular inflammation), seizures, coughing, enlarged lymph nodes, and a variety of other signs may occur with blastomycosis.

How is blastomycosis diagnosed?

"Cytology and/or histopathology are required to diagnose blastomycosis conclusively."

Cytology and/or histopathology are required to diagnose blastomycosis conclusively. Cytology, the microscopic examination of cells, may be performed in the veterinarian's office using fluid that is draining from an open wound or is aspirated from a nodule or lymph node. Biopsies may also be obtained from affected areas. Histopathology is the microscopic examination of cells within a tissue sample. A tissue sample is obtained and sent to a veterinary pathologist for this diagnostic test. Since the organism is usually shed in large numbers in the draining lesions, blastomycosis may be diagnosed in the office with cytology.

There is also a screening blood test called an agar-gel immunodiffusion (AGID) test that can be used to determine potential exposure. A positive result on this test does not necessarily mean your dog is infected with blastomycosis. It only means that your dog has been exposed to the fungal organism. Many humans and animals have positive blastomycosis screening tests, but this does not mean that they have (or had) blastomycosis. To complicate matters further, up to 30% of dogs with blastomycosis lack measurable serum antibodies at the time of initial evaluation. If Blastomyces dermatitidis organisms are subsequently identified by cytology or histopathology, the veterinary clinician is left in a challenging position.

There is a new antigen test (enzyme immunoassay or EIA) for blastomycosis that may enable veterinarians to more quickly and accurately diagnose this condition. Ask your veterinarian about the availability of the new antigen urine and serum tests if your dog is suspected of having blastomycosis.

Can the disease be treated?

Yes, although not all pets will survive. Fortunately, newer anti-fungal agents such as fluconazole and itraconazole are well tolerated by most dogs and have relatively few side effects when compared to the agents being used several years ago. Itraconazole is the preferred drug of treatment for most dogs. Dogs may require several months (at least four to six months in most cases) of therapy to successfully treat this disease. Amphotericin B (Abelcet®), ketoconazole, or a combination of medications may be used in certain cases.

What is the prognosis for my dog? 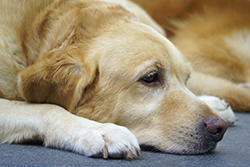 "...a dog in poor condition or with advanced disease is less likely to survive."

There is no way to determine this before starting treatment, although a dog in poor condition or with advanced disease is less likely to survive. For many, the critical period comes in the first 24-72 hours when the drug first takes effect and the fungi begin to die. Because the lungs usually harbor a large number of these fungal organisms, a severe inflammatory response may occur, causing respiratory distress or failure. Your veterinarian will radiograph your dog's chest prior to therapy to assess the condition of the lungs, although chest x-rays cannot always predict the outcome of treatment. For these reasons, a guarded prognosis is always warranted when dealing with blastomycosis.

Relapse of blastomycosis tends to be more common when the fungus invades the nervous system, the testicles, or the eyes. Many drugs have difficulty penetrating the natural defensive barriers of these body systems, making it much harder to eliminate organisms in these sites. Castration of male dogs may be required to remove this potential source of organisms. For similar reasons, one or both eyes may be removed, especially if the disease has already blinded the pet. Even when treatment appears to be successful, the risk of relapse is very real with this disease. Follow-up testing of the urine with the MiraVista urine antigen test is generally recommended to evaluate treatment success and to determine when medication may be discontinued.

Am I at risk of infection from my animal?

Studies on the fungus have shown that once an animal is infected, the organism enters a different form or phase that does not appear to be infectious to other animals or to humans.

"Common sense dictates that strict hygiene should be followed when handling any draining lesions."

However, common sense dictates that strict hygiene should be followed when handling any draining lesions. Handlers should wear protective gloves and wash their hands thoroughly after contact with an infected animal.

In most cases, the infected pet does not need to be segregated from the owner or other household pets. The true risk of infection to others probably comes from sharing the same environment where the original infection occurred (i.e. soil, etc.). Because the Blastomyces organism may be harbored near your home, you should advise your family physician of your pet's diagnosis.

If anyone in your family falls into one of the following categories, we would recommend that you consult with your physician:

6.  Anyone with a known immune system disease

This client information sheet is based on material written by: Ernest Ward, DVM

© Copyright 2016 Lifelearn Inc. Used and/or modified with permission under license.