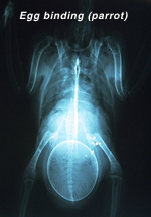 What is egg binding?

Egg binding occurs when the female bird is unable to expel an egg from her body. While most female birds have no problems laying eggs, occasionally they may encounter difficulty. When detected early, egg binding may be resolved easily. If a prolonged period has elapsed since a bird began attempting to lay an egg, she may become critically ill.

"Most owners are surprised that a female bird that is not exposed to a male will lay eggs."

Most owners are surprised that a female bird that is not exposed to a male will still lay eggs. Remember, human females ovulate regardless of the presence of a male; therefore, it makes sense that a female bird can ovulate without a male present. The major difference is that the egg is microscopic in people, whereas in birds, the egg becomes large, has a shell, and is expelled from the bird. Not all female birds will lay, but they are all capable of laying eggs.

There are numerous reasons for egg binding. Many birds are fed a nutritionally unbalanced diet, such as seeds that are deficient in many vitamins and minerals, especially calcium, vitamins D and E, and selenium.

These vitamins and minerals are necessary, not only for formation of the egg shell, but also for proper contraction of the oviduct and uterine muscles; improper muscle contractions can result in failure to pass the egg. Soft-shelled or shell-less eggs and other egg malformations resulting from improper levels of dietary calcium, may also lead to problems. Obesity (from a high-fat, all-seed diet or lack of exercise), hereditary factors, old age, and improper laying environment are all other potential causes of egg binding.

How can I tell if my bird is egg bound?

Many owners do not even know their bird’s gender and often do not suspect egg binding as a cause of their bird's illness. Determining the sex of your pet bird by a simple DNA blood test will let your veterinarian know whether egg binding is a possible cause of your pet's illness.

"Many owners do not even know their bird’s gender and often do not suspect egg binding as a cause of their bird's illness."

A bird laying eggs should pass the egg within 24-48 hours. How many eggs a bird lays successively depends on the species, age, and health of the bird. Birds with egg binding may or may not have passed an egg more than 2 days ago, are usually weak, not perching, often sitting low on the perch or on the bottom of the cage, and are straining as if trying to defecate or lay an egg. Sometimes the egg will bulge out of the vent (where they defecate from) or may be retained in the oviduct or cloaca (the common chamber that collects the reproductive, urinary, and gastrointestinal tracts) which then prolapses through the vent. If the egg is putting pressure on the nerves that control the legs, the bird may not be able to stand. Since the signs associated with egg binding are also seen in sick birds with other causes of illness, diagnostic testing is essential in formulating a proper diagnosis.

How is egg binding diagnosed? 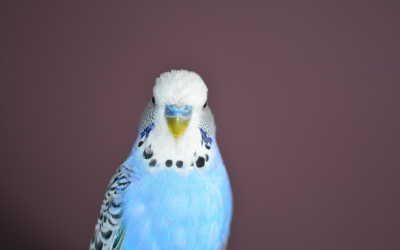 During the physical examination, your veterinarian may feel the egg inside the bird. Usually radiographs (X-rays) are needed to confirm the presence of the egg inside, especially if the egg has a shell around it. Some eggs get stuck before the egg shell is formed; these shell-less eggs are harder to confirm on X-ray and sometimes require a sonogram (ultrasound exam) to detect their presence.

Early diagnosis of egg binding is important, as small birds can die within a few hours of becoming egg bound from compromised circulation and pressure on their airways from the trapped egg.

How is egg binding treated?

Treatment varies depending upon how sick the bird is, the location of the egg, and the length of time the bird has been egg bound. Critically ill birds are first treated for shock, and then attempts are made to extract the egg. Mildly affected birds may respond to supplemental heat, rehydration with injectable fluids, calcium, and vitamin D3.

"Critically ill birds are first treated for shock, and then attempts are made to treat the egg binding."

Can egg binding be prevented?

Birds on a poor diet, such as seeds, should have their diet changed to a nutritionally complete, pelleted diet, according to specific instructions from your veterinarian. Calcium, phosphorus, and vitamin and mineral supplementation may be recommended. Obese birds should be encouraged (through diet change and increased exercise) to lose weight. Birds that are chronic egg layers are commonly treated with hormonal drug therapy to stop egg laying temporarily so that their bodies can recover. A hysterectomy (removal of the oviduct and uterus) is typically the last choice therapy when medical and egg extraction through the vent are not possible. This surgery involves life-threatening risk to the bird.

© Copyright 2019 LifeLearn Inc. Used and/or modified with permission under license.