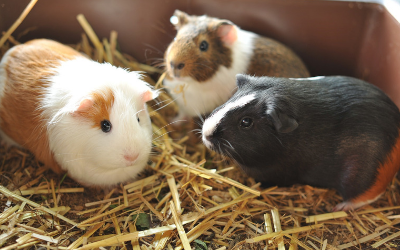 Guinea pigs, also called cavies (or cavy for a single guinea pig), originated in South America. They were probably introduced into Europe soon after the first Spanish explorers returned from that continent in the 1500s. They became favorite pets in the early part of this century. Guinea pigs are also bred as show animals with a wide variety of coat colors and fur types.

The three most popular breeds (there are probably 13 or more different breeds) are:

Guinea pigs come in a wide range of fur colors and patterns, as well as a hairless breed called a ‘skinny pig’. Males are called boars, and females are called sows. Males tend to be larger than females, and their weight varies from 700-1200 grams (1.5-2.5 pounds).

"Guinea pigs come in a wide range of fur colors and patterns, as well as a hairless breed called a skinny pig."

Guinea pigs live, on average, 5-6 years (although some can live to 8-10 years of age). Their teeth grow continuously throughout life and it is critical that they eat grass hay (such as Timothy hay) every day to help them wear down their teeth as they grow. Guinea pigs, like humans and primates, require a dietary source of vitamin C, as their bodies cannot manufacture vitamin C on their own.

If a guinea pig senses danger, it will either freeze or make an explosive attempt to run away. Guinea pigs do not see well but have well developed senses of smell and hearing. They are communicative and use a wide variety of sounds to express themselves. Young guinea pigs display a unique behavior called popcorning when they are happy, in which they jump straight up in the air and let out squeals of delight.

"Young guinea pigs display a unique behavior called popcorning when they are happy, in which they jump straight up in the air and let out squeals of delight."

Guinea pigs are generally hardy, easy to care for and, if handled frequently and gently, make great family pets. They are wonderful first pets for families with children. They rarely bite or scratch and are docile, non-aggressive, responsive animals.

Housing your guinea pig is not particularly difficult, as there are a large variety of hutches and cages commercially available. Guinea pigs should be kept indoors. They need supervised time out of their cages each day to run around and exercise. An indoor cage size of 18" x 24" (45 x 60 cm) should comfortably accommodate a guinea pig. Even though guinea pigs are not good at jumping or climbing, the cage should be secure and at least 10" (25 cm) in height. Remember, bigger is better.

Cages can be constructed of plastic, metal or wire, as long as they are easy to clean daily. Solid flooring is best, as wire mesh floors can cause injury to guinea pigs’ feet, causing sores (a condition called bumblefoot or ulcerative pododermatitis). Shredded newspaper or commercially available recycled paper products make the best bedding, as they are safe if ingested and are not dusty or irritating to the respiratory tract. Guinea pigs can quickly make a mess of a cage. 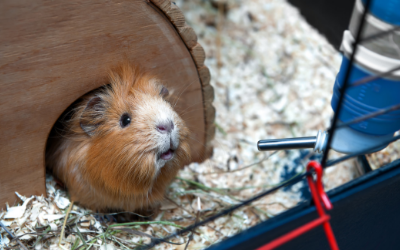 Food dishes should be large heavy ceramic crocks that are hard to tip over, and water is readily accepted from a sipper bottle that should be cleaned and replenished with fresh water daily. A small upside-down box or container with a cut out for a door is a welcomed hiding area. Since guinea pigs are social, they can be kept in small- to medium-sized groups. However, if the sexes are mixed, they will mate and therefore quickly increase in number! To avoid this problem, they should be kept in same sex groups, or the male should be neutered. Spaying the female is an option, too, but a more involved and difficult procedure. Temperatures between 65-80°F (18-26°C) are ideal. Anything over 80°F (27°C) will increase the likelihood of heat stroke, especially in animals that are overweight or pregnant.

Guinea pigs reach sexual maturity at around 3-4 months of age. If young males and females are housed together, they should be separated by this age, otherwise they are likely to breed. After about eight months of age, the female guinea pig's pelvic bones become more tightly fused, and if she has not had a litter by that time, giving birth can be more difficult. Sows give birth to 2-4 fully developed, relatively large, fully furred offspring with open eyes and the ability to eat solid food (although they will still nurse). These large babies have a hard time getting through the pelvic canal unless the mother's pelvic bones are relatively immature and malleable or mobile.

These large offspring also predispose the mother to a life-threatening condition called pregnancy toxemia. This is a metabolic disorder causing the pregnant female to have low blood calcium and high blood pressure. It manifests as loss of appetite in the early stages, deteriorating to muscle twitching and coma. Prompt veterinary attention can save affected animals, but the likelihood of developing the problem can be reduced by providing the pregnant animal with plenty of water and high-calcium greens during pregnancy. Ideally, all pregnant guinea pigs should be checked by a veterinarian to try to prevent pregnancy-related problems.

The average gestation period for guinea pigs is 63 days. If gestation continues over 70 days, the guinea pig should be seen immediately by a veterinarian, and it is likely that the entire litter will be stillborn. As with many rodents, the female guinea pig will be able to mate within a few hours of giving birth but should not be allowed to; she needs time to recover and replenish her metabolic reserves before becoming pregnant again. If your guinea pig has a large litter (over three or four piglets), consider fostering one or more of the piglets to another sow (female), since guinea pigs have only two nipples to suckle their offspring. This is something to discuss with your veterinarian.

© Copyright 2019 LifeLearn Inc. Used and/or modified with permission under license.